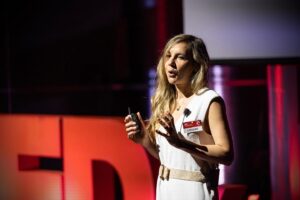 Caroline Côté is an adventure filmmaker and long-distance athlete. One of her last expeditions was Polar Shadows, where she crossed the Svalbard archipelago in the Arctic Circle in winter in the polar night for 63 days in complete autonomy, in the company of polar explorer Vincent Colliard. She has also accomplished several other major expeditions including the crossing of a little explored region of Antarctica (twice) for 30 days in complete autonomy on the Forbidden Plateau where her team climbed untouched peaks.

She also recently participated in the Pull of the North expedition, where she followed the Yukon River for over two months by canoe through Alaska to meet the Athabascan-speaking people.

She has just returned from Northern Quebec, specifically from Kuururjuaq Park, a place she visited to create the documentary called Traversées (co-directed by Florence Pelletier) currently on a world tour of festivals.